Visit Beirut For Your Next Holiday

As always on Visitalot, we like to give you reasons why you should visit places. However, unlike any other travel website, the places that we recommend are not your typical locations. In fact, we like to come up with the craziest places to stay and barrage our readers with reasons why you should go there. In this episode of our unique travel show, we bring you Beirut, a city that many will not have heard of, in a country where even fewer people have heard of. Take a punt on this surprising little city and read below to find out some more.

Beirut is the capital city of the Middle Eastern nation Lebanon. The population is estimated to be anywhere from 1 million to 2.2 million people- making Beirut the 15th largest city in the Arab world. Alongside this accolade, it is also one of the oldest cities in the world, having been inhabited for over 5,000 years. The city sits on the coast of the Mediterranean and therefore experiences much of the heat, culture and food that is common in the area. Due to its age as a city, Beirut holds some amazing historical treasures and has been a part of many empires and civilizations- both ancient and modern.

If this sounds like the kind of place that you may be interested in, or you just need a little more encouragement, then read a few of these facts.

This is a section where we like to fill your head with a plethora of strange and interesting facts all centred about the place in question.

As promised, some really wacky facts for you. If any of these intrigued you and you want to know more, just read on and learn a little bit more about this Arab gem.

Where it is and What the Climate is Like

As mentioned above, Beirut is located in the country of Lebanon. Lebanon is a country that has sea access to the Mediterranean and is close to the Arab states in the Middle East. The city itself is right on the coast and is in the Western part of the country overall. This gives the city access to both ports and via air, making your trip over flexible. Airlines such as British Airways and Middle East Airlines will offer direct routes to Beirut, although, these may be more expensive when to compared to flights to other destinations- note that you may need to get a connecting flight from a nearby country. If you were thinking about travelling via boat, then you may need to catch a cruise from a port in the Mediterranean as you may not find such a cruise that will go direct from your local port.

When it comes to weather, there is really nothing to worry about. Beirut shares much of its weather with the rest of the Mediterranean and has Summer during the months from May to August and will experience Winter from September to March. However, unlike some of the places that we have covered, the Winter in Beirut is very mild and the coldest month will be at the start of the year in January where temperatures will dip as low as 13°C. When it comes to rain, the rain will understandably follow the colder weather so December and January will see the most rain by far. Because of this combination, we tend to advise people not to go during the Winter as it is not as nice and will not show the city in as good a light. Summer on the other hand is quite something in the city. Temperatures will peak at 31°C in August and rain will be very rare during the season. Therefore, you are going to want to bring shorts, t-shirts and lots of sun cream.

Where to Stay and What to Do?

Below is a short list of some of the best places to stay in the city and the kind of attractions that are close by and accessible to you. 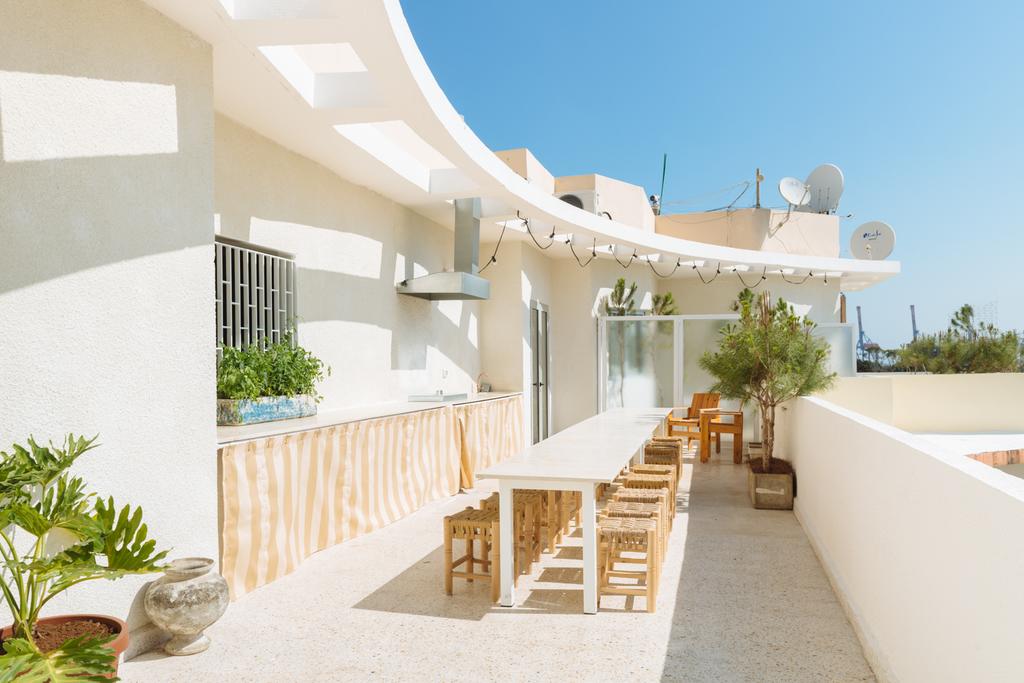 This hotel has to be one of the most interesting ones in the city and has many features that make it worthy of this title. In each of the rooms are large windows giving you views of what the real Beirut is like and a nice airy, light place to stay. Stepping outside, there is a rooftop bar where you can eat and drink while you take in some of the sun or maybe watch the sunset over the city. For your convenience, there is also a restaurant in the hotel that will serve you up some traditional Lebanese food to really immerse yourself into the culture.

When it comes time to look for things to do in Beirut that are nearby to this hotel, you will not have a hard time finding things to do. The National Museum of Beirut is just a 7-minute drive away and inside is all the history you could ever want to know about the city of Beirut and the country of Lebanon. Lebanon has such an interesting history and is unique in the sense that it has been occupied during so many eras of history and by so many different empires. This makes the museum a fascinating place full of artefacts and information from any century from prehistoric times right up to present day.

If art is more you thing then even closer to this hotel is the Sursock Museum. Just a 6-minute drive away lies an art museum like no other. This museum is full with both local Lebanese art and international art all displayed in a villa built in 1912. The impressive façade is just one of the reasons why you should visit this museum and if you step inside, then there are plenty of others. If you wanted to really connect with local culture and the kind of symbology and values that are at the heart of the culture.

Another popular destination for both locals and tourists is Zaituna Bay. This a bustling promenade filled with chances to dine, shop or just stare out at the ocean. It is just 9-minutes away and will give you somewhere to walk during the lovely summer evenings in Beirut and maybe even somewhere where you can pick up a little present for those back home. A truly must see place in the city. 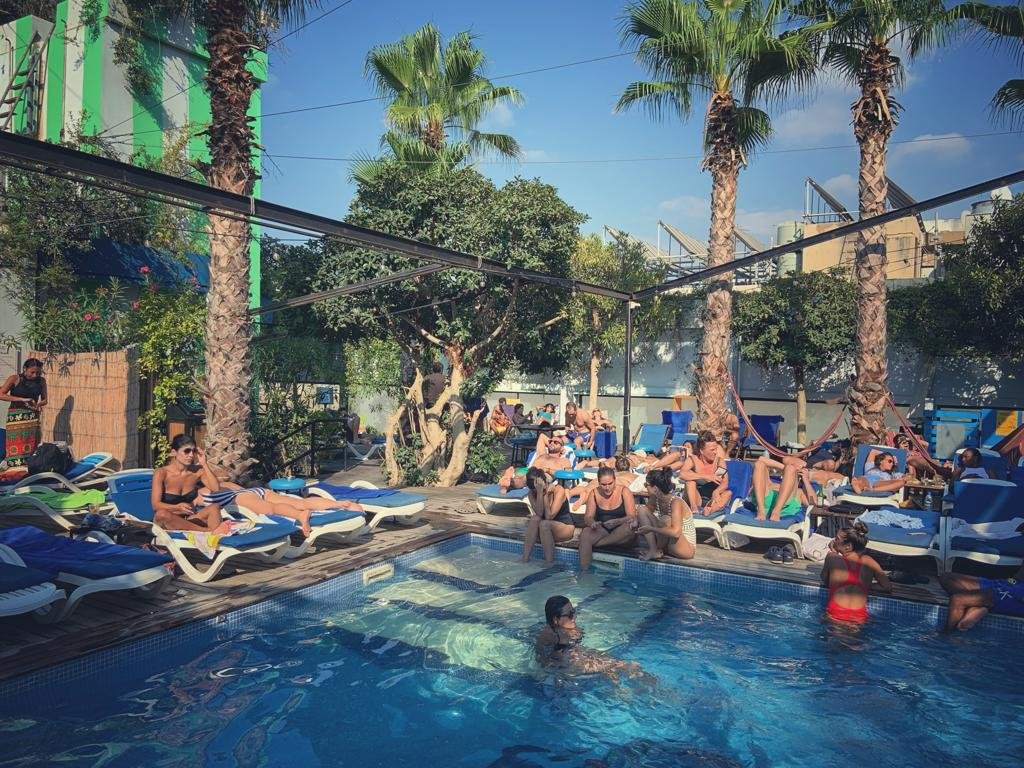 This is a great little hotel that really packs a punch considering its price, the facilities available to you and its location. It is also highly rated on Google with a 4.4-star rating and customers loving the pool and view combination, the service and the friendly nature of all of the staff and purely the ambience of the place- something that can be hard to find in modern hotels.

Close by to this surprising hotel are a number of great attractions. Within 10-minutes is the promenade bringing you chances to shop, eat and take some pictures. Enjoying the sea breeze in the late afternoon is the kind of holiday that dreams are made of. In fact, on the same street as this hotel is a wide variety of restaurants and bars offering all kinds of cuisine from international dishes to local delicacies- food that you have to try at least once on this trip.

A little while out of the hustle and bustle of the city is Raouche Rocks. This a rock formation that is iconic and really is a symbol of the city. With the sunset in the background, this makes for an idealistic picture and somewhere that you have to visit.

What to see more locations In Beirut?

What to go somewhere else?

If our visit Beirut guide isn’t for you then use this search facility to pick any location in the world, simply type in your region, district, country or attraction anywhere in the world and we will whisk  you away to the latest offers.

If you loved our whistle stop Visit of Beirut then you will love the rest of our tours of Asia.  Pop along to the visit Asia section of our website and see what other wonderful and weird holidays are available for you to ponder and plan for.