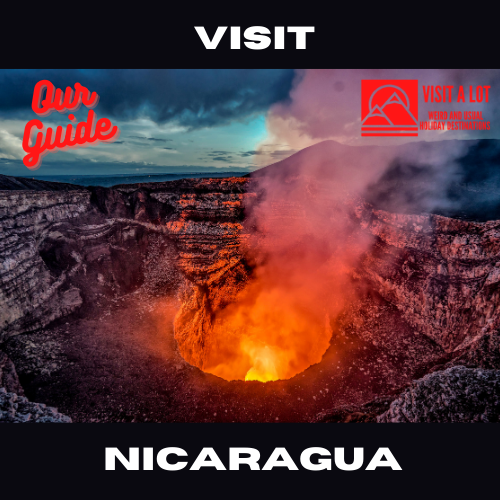 As far as unusual destinations go, Nicaragua is up there. The Central American nation has a tumultuous history and isn’t always on the radar of intrepid travellers to the region, who flock to the beaches of Mexico and the lush cloud forests of Costa Rica. But delve a little deeper and you’ll discover active volcanoes, ancient ruins and tropical paradise beaches, with all the makings of a fantastic holiday.

In this article, we’ll tell you everything you need to know about visiting this slice of the Caribbean. We’ll start with some fun facts about Nicaragua, before getting you to grips with all the best places to stay in the country, as well as the best things to do. We always make sure to provide useful information regarding the climate and weather of our focus destinations too, and this article will be no different. If you’re interested in visiting the Central American country then you’ve come to the right place. So sit back and discover everything you need to know about visiting Nicaragua.

If you’re a regular to our website then you’ll know that we always like to start these articles with a few fun facts about our destinations. These are a lighthearted way to introduce an unusual country, and they provide handy trivia for pub quizzes up and down the country. Read on to find out a little more about Nicaragua.

As you can see, there is much more to Nicaragua than meets the eye. A charismatic country of strong-willed people and incredible natural sights, from active volcanoes to Lake Nicaragua. Keep reading to learn more about the location and climate of the country.

Nicaragua is the largest country in the Central American isthmus, the narrow strip of land which connects North and South America. It borders Costa Rica to the south and Honduras to the north, with the Caribbean Sea on its eastern shore and the Pacific Ocean to its west.

Travellers to Nicaragua would usually fly to the country’s main airport, found in the capital of Managua. This is the only international airport in the country, though there are many more domestic ones which can be utilized for travel around the country. Nicaragua also has a large bus network, though this is geared towards the locals. It is very cheap, but quite uncomfortable, and not suitable for long journeys across the country. In the main tourist hubs, you will find shuttle buses, which connect the main attractions and are a much better bet. If you want to consider renting a car, then bear in mind the difficult address system, it can overcomplicate journeys!

Being located on the equator, it is no surprise that Nicaragua has a tropical climate. Expect two very distinct seasons – the wet season generally lasts from May to October and is characterized by hot, humid temperatures and powerful thunderstorms. This makes the vegetation more attractive in the countryside, but generally speaking, tourists will want to head to Nicaragua during the dry season, from November to April. Temperatures are cooler, in the mid-twenties (Centigrade) and as the name suggests, there is very little rainfall and minimal humidity – perfect for exploring or relaxing on the beach, whichever you prefer.

Temperatures are hottest at the coast, getting cooler in the central part of the country, and cooler still in the mountainous regions. Generally there is more rainfall in the east than the west.

One important factor to note in favour of visiting Nicaragua in the rainy season is that this is when sea turtles across the country make landfall to nest. The Caribbean is one of the world’s hotspots for turtle nesting, and a number of species make use of Nicaragua’s beaches. Hawksbill, loggerhead and green turtles all nest in the country between July and December, which fall mainly in the rainy season.

Where to Stay and What to do

If you’re convinced that Nicaragua is the bucket list idea destination for you, then you’re going to need somewhere to stay. Read on to discover our pick of the best accommodation options in the country, as well as some of the must-visit sights to see. 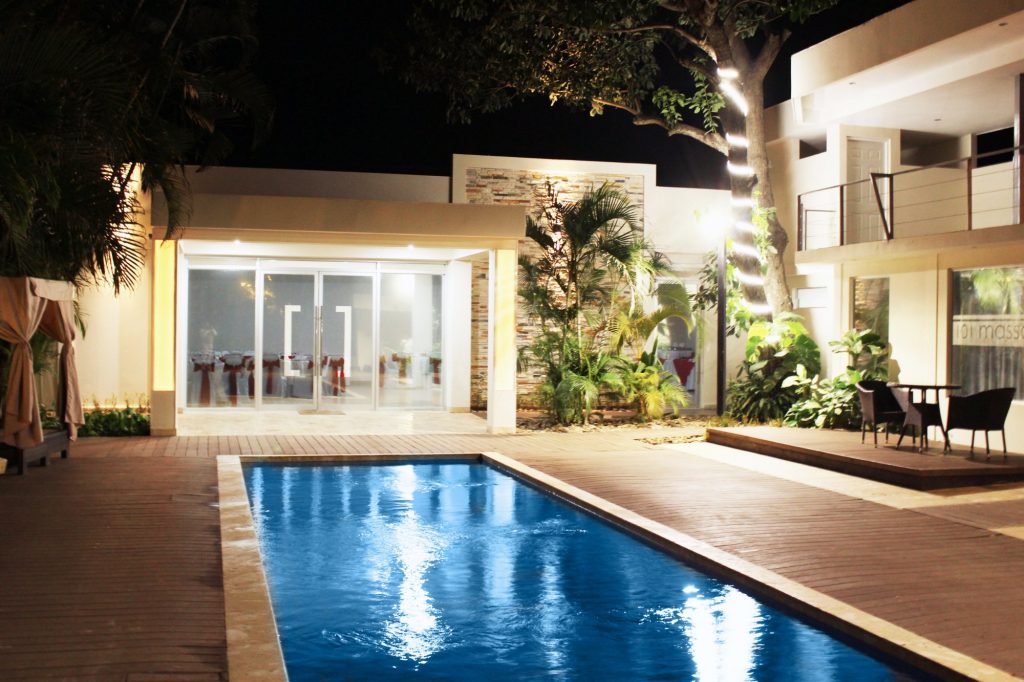 If you’re looking for accommodation in the Nicaraguan capital, then Hotel Contempo offers the best middle-ground between price and comfort. There are a handful of luxury 5-star hotels in the city, but if you’re on something of a budget then this 4-star resort is a great choice. There are just 24 rooms in the boutique hotel, and it offers a personalized and intimate experience, as well as great customer service. Spotlessly clean and boasting free Wi-Fi connection, guests can also make use of the onsite Restaurante Azul and the outdoor pool. There is also a free daily breakfast and a gym, as well as free parking for your hire car, should you choose to rent one. Located just to the south of the city centre, it is a little further than some to the nearest attractions, but the quality of the accommodation and the relatively low price make this a sacrifice worth making. 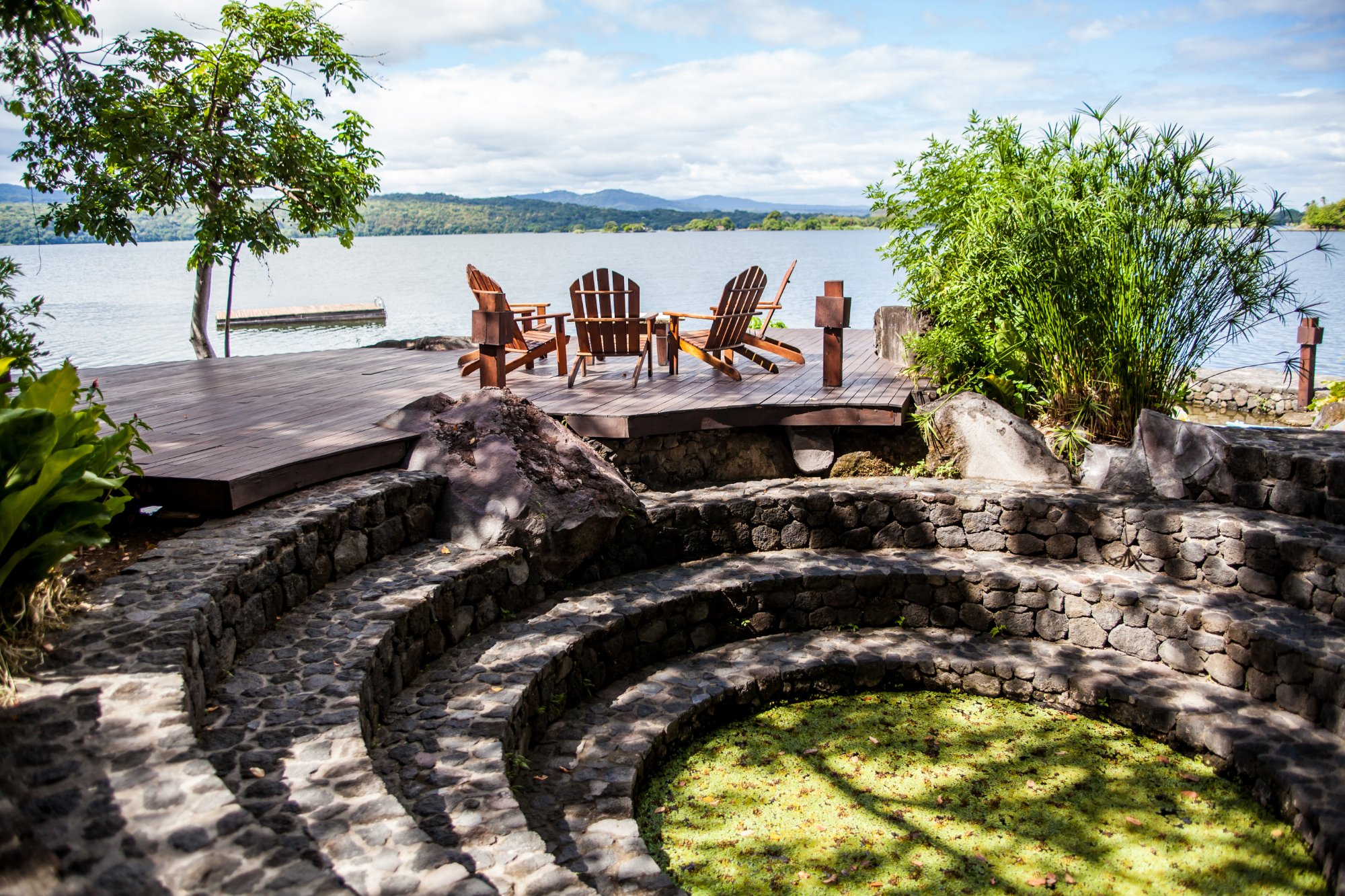 For a completely different experience, guests will want to head to Jicaro, a private island in Lake Nicaragua. The eco lodge here boasts nine individual lodges, raised off the ground in a treehouse style. They offer wonderful panoramic views of Lake Nicaragua and there is a focus on sustainability throughout the lodge. Solar panels heat the water, ceiling fans replace air conditioning and the hotel runs nature tours, allowing guests to get to grips with the local ecosystems. The onsite restaurant serves only locally produced, fresh ingredients and you can even have a go at catching your own dinner, fresh from the lake using local methods. 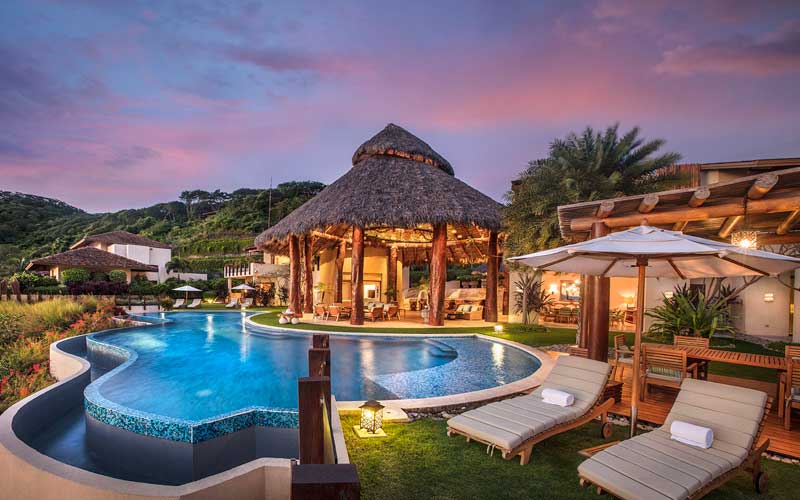 We’ve found you somewhere to stay, now we need to fill those days. Below are some of the main attractions in the country, which you’ll want to tick off during your visit. 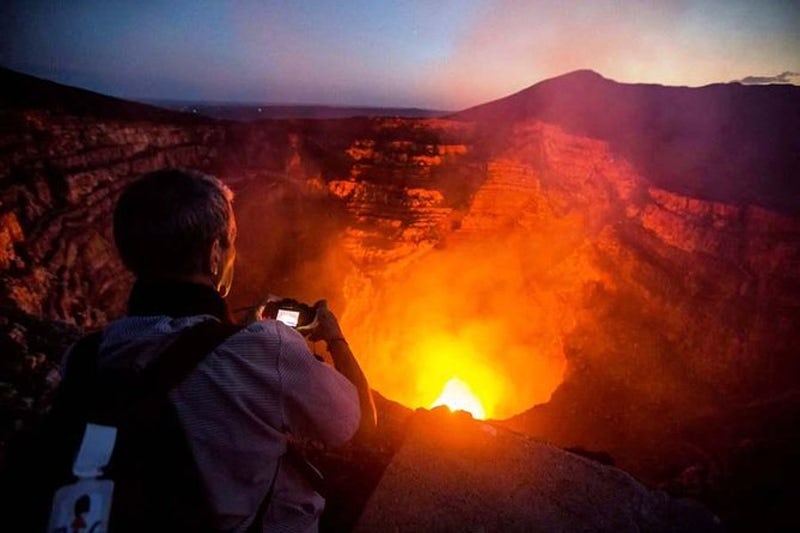 With so many active volcanoes, it would be a travesty to visit Nicaragua without exploring one of the incredible natural formations. Masaya is the pick of the bunch, with a molten lava lake seen bubbling away from the rim of the crater. Even better, there is no long and difficult hike included to reach the crater, with a car park located just a short walk away. In a reminder of the threat of eruptions, the rule is that you have to park facing downhill, so that a quick escape can be made during the event of an eruption. This may seem a little scary, but also thrilling and one of the must-do activities in Nicaragua. The volcano is located just a few miles south of Managua, making it easily reachable by travellers to the country. 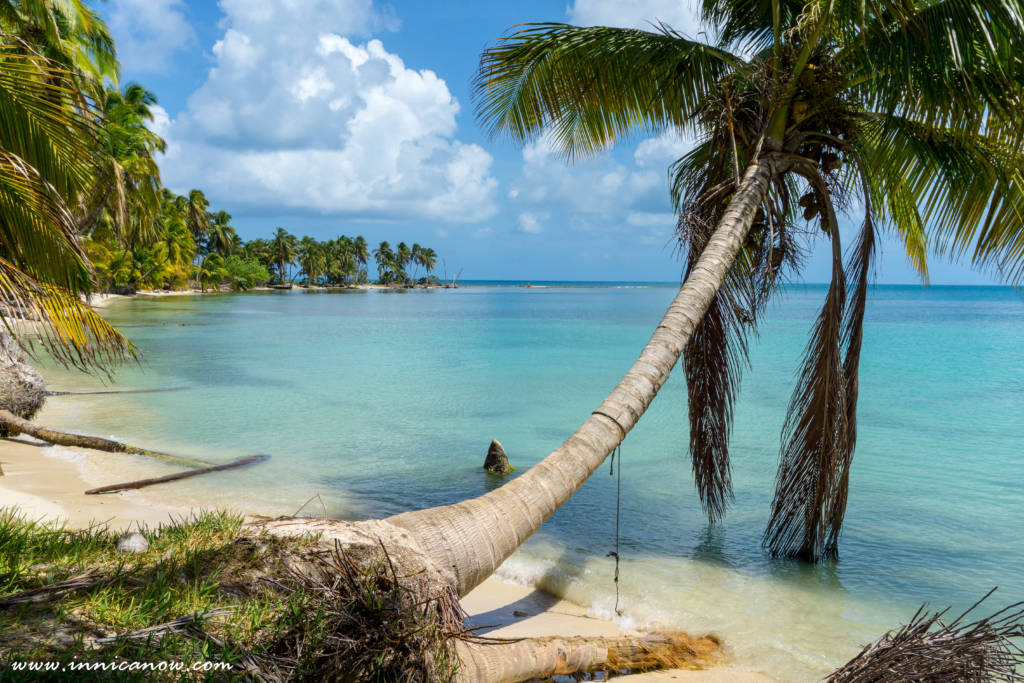 Perhaps the most tempting tropical paradise in the country, the Pearl Cays are found off the eastern coast of the Nicaraguan mainland and are made up of 12 tiny islands. The majority are privately owned but a boat trip from the mainland yields some of the most beautiful scenery you’ll find anywhere in the world. Between June and September the beaches are crawling with nesting hawksbill turtles, and a successful conservation program in the region has boosted these numbers even further, boding well for the future of this rare species. 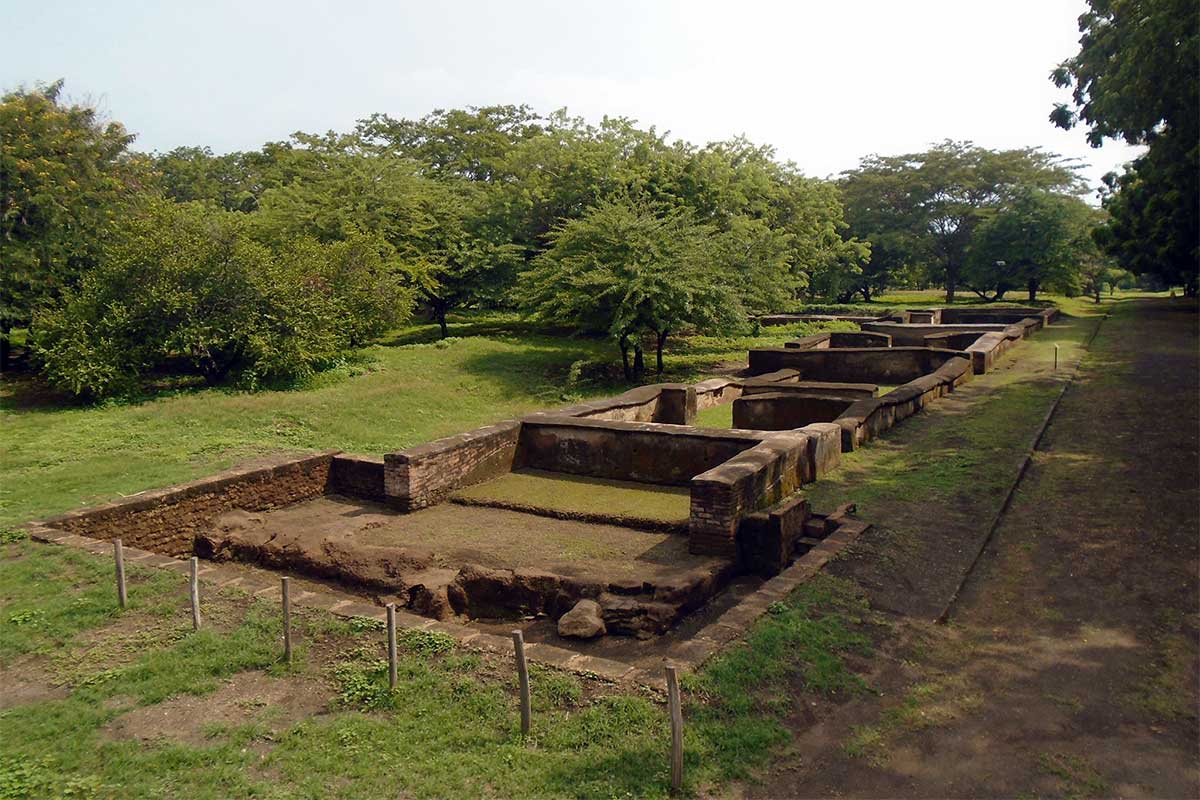 As discussed, the ruins of Leon Viejo are one of the most important archaeological sites in Nicaragua, and a must-visit for history buffs. Visitors to the UNESCO-listed site can stroll amongst ruined streets and see buildings that have survived centuries of war and natural disasters.

Pristine natural landscapes, fascinating ancient ruins and colourful cities combine to make you want to Visit Nicaragua an incredibly attractive holiday destination. Tourism in the country has been taking off in recent years and is only set to increase, bringing much-needed investment to the country, one of the poorest in Central America. Now is a great time to be exploring the region, before the hordes arrive as predicted in the next few years.