Thought About A Falkland Islands Holiday?

The world we live in has the most beautiful and scenic islands, and none more so than the picturesque Falkland islands. Situated off the coast of Argentina, there are two main islands, East Falkland and West Falkland. The Falkland government also act as administers for the British overseas territories of South Georgia And South Sandwich Islands. The islands are a common excursion for a lot of the South Atlantic cruise liners, and they allow you to see a little snap shot of the United Kingdom from over 8000 miles away. Many people choose to visit because of the amazing wildlife and fauna. It is also perfect for military history fans who want to learn more about the famous conflict in the 1980’s

Where are the Falkland Islands?

The Islands are located around 300 miles of the Southern tip of South America. And are adjacent to the country of Argentina.  They sit in the cold and sometimes hostile waters of the Southern Atlantic and only a mere 2500 miles (4123km) from the South Pole.  The weather tends to be cold during the winter months, with temperatures hovering around Freezing during January and February. However, during the summer months, the average temperature has been known to reach a comfortable 23/24 degrees.

Where To Stay On The Falklands?

Stanley is the main town of the islands and its cultural centre. Due to the islands being quite sparse, the majority of the 3000+ population live here.  For such a small island it has quite a lot packed in. It has a museum which shows the birth of the islands, the history of the falklands conflict in 1984 along with much more Sporting activities are famous on the islands and include bird-watching, fishing and horseback riding. It is also worth noting that in March of every year the islands host the world most southern most marathon, this is seen as one of the most challenging on the circuit.  If you are a fitness fanatic, or you want to try something a little bit different while you are on your break then give this a try

Whilst the Island is relatively small with an even smaller population, there are some really nice places to stay.  At the time of writing this article there are 16 hotels and B&B’s listed on Trip Advisor.   These are just some of the best picks. 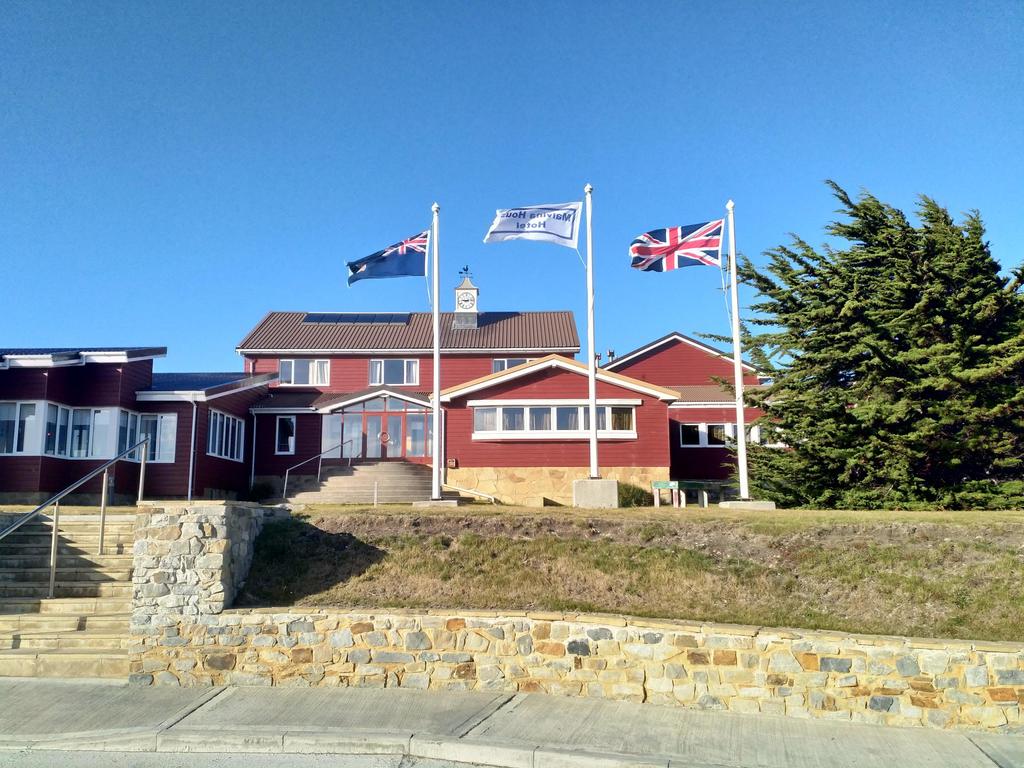 The Hotel is classed as Stanley’s Premier go to hotel, it is situated on Ross Road which is close to all of the local attractions and amenities. All rooms are en-suite with a bath and showers, IDD telephone, Flat Screen TV, Tea/Coffee making facilities, Hairdryer, and WIFI enabled. They have a lounge bar and a 120 cover restaurant serving high quality freshly cooked food which uses locally sourced products. The food is prepared and overseen by their very own multi talented chef Matt Clarke 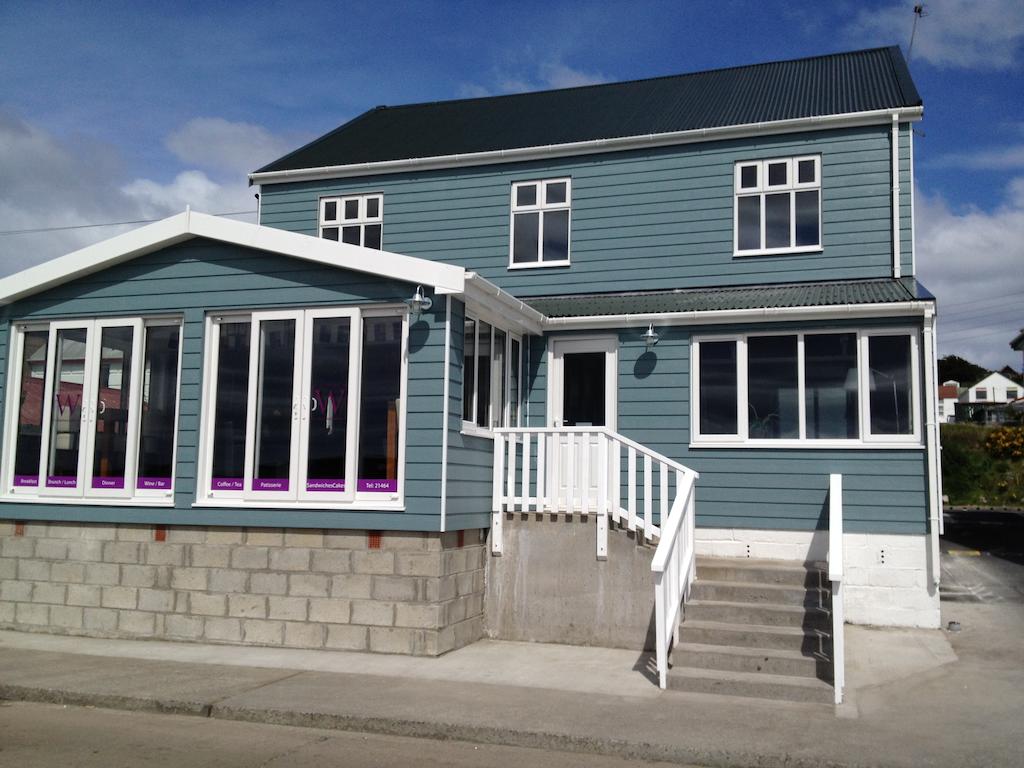 Of the two hotels situated on the islands, this is the second.  A boutique hotel with a contemporary feel, which is situated in central Stanley, it is just a few short steps away from local amenities and attractions. The Waterfront has recently gone through a major renovation which has s resulted in individually designed bedroom suites and luxury rooms. There are Junior suites with sea views available, and they are spacious with a  sitting area and a king size bed that can be twinned. 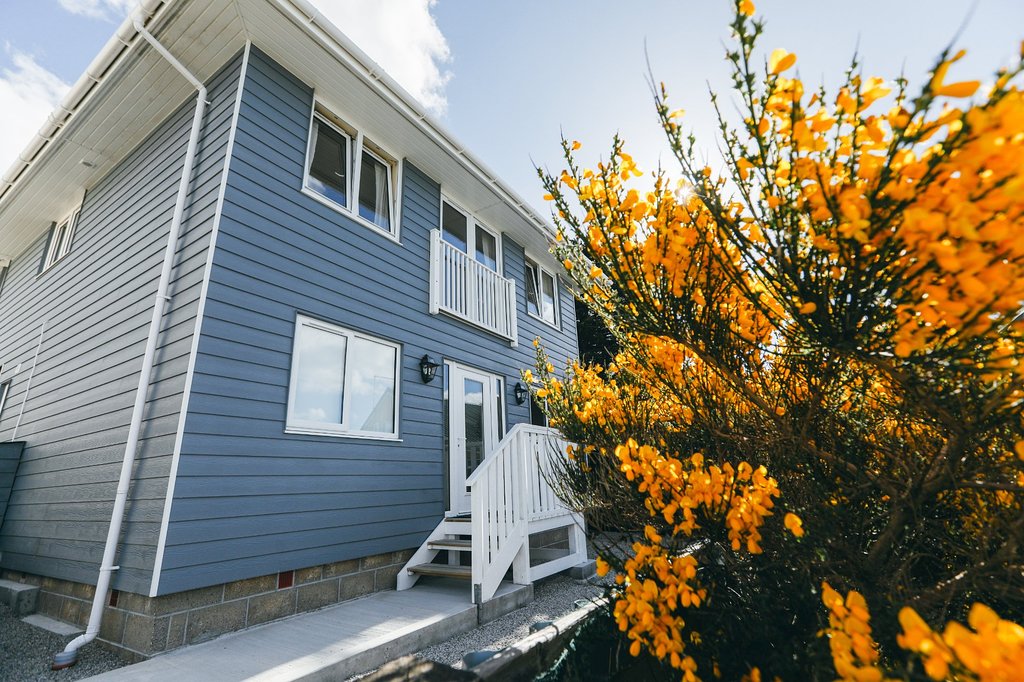 If you are looking for something a little more basic and rustic then you will not go far wrong with this Stylish B&B. Each of the four bedrooms is completely unique and comes with its own character. It claims to have been designed with guests comfort and relaxation being the top priority . Each room comes with luxurious bedding and toiletries, as well as en-suite bathrooms with power showers and soft fluffy bath sheets. All guests receive  complimentary coffee tea and coffee in the dining room throughout the day, they are welcome to help themselves to a selection of soft drinks from the honesty bar.

#1 Check out the wildlife 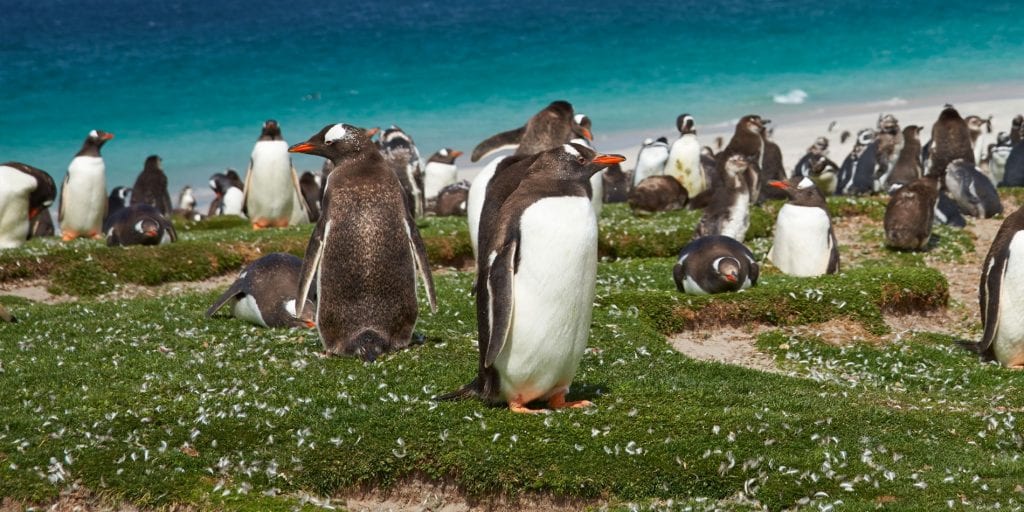 The islands are a breeding grounds for million of penguins mostly rockhopper, magellanic and Gentoo penguins with a lesser number of king and macaroni penguins. The islands are also home to multiple bird species such as the black crowned neck heron. The Gypsy Cove is the most famous location to check out these animals, especially at night when you get to listen to the distinctive braying sound of the Magellanic penguin 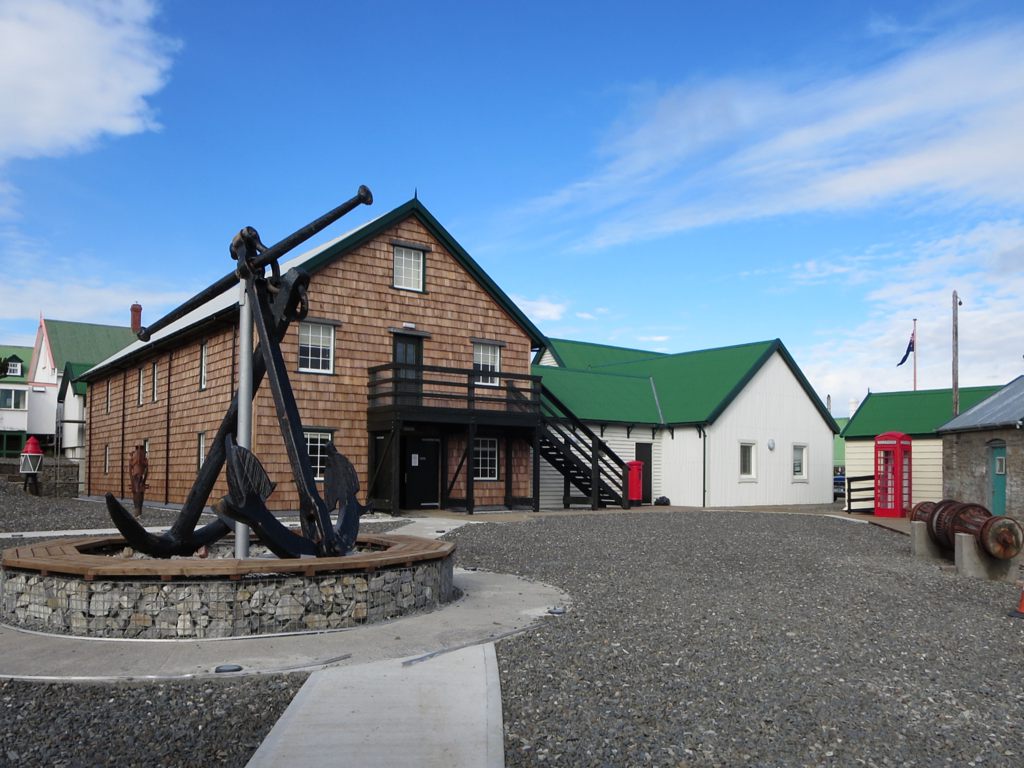 This is a must-see for every visitor to the Islands. The museum shows off maritime and history, flora, fauna and of course the geology of the island. It contains special exhibits on the 1982 Falklands war along with Antarctic literature and exhibits giving additional insights into these important aspects of Falklands’ heritage. The building that forms part of  the museum are some of the oldest on Stanley, dating from the founding of the town in the 1840s. They also include recreations of the original printing office, a telephone exchange, smithy and a wash house. 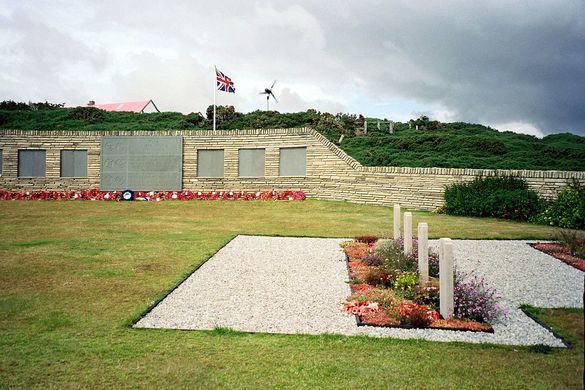 At the time of  the Falklands War conflict, a significant amount of the British troops who died on the  battlefield were put into temporary graves until the war was over. Once this happened a permanent cemetery was established. At the time, it was a tradition was that any British troops killed in combat would be laid to rest as close as possible to the position where they fell, therefore, a memorial was constructed to remember them as soon as it was safe. This is a must have for military enthusiasts who want to learn a little more about the conflict and the people that sacrificed their lives for the Islands and their freedom. 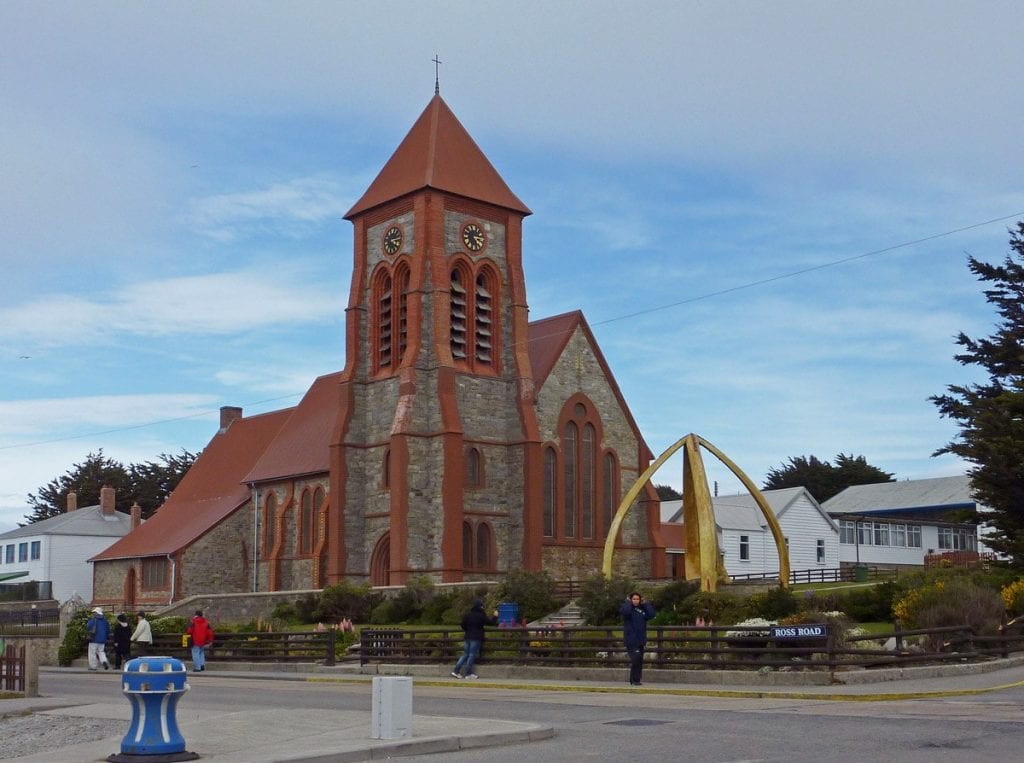 Built in 1892, this is one of the Crown Jewels of the Falkland Islands.  This iconic building graces the nation’s paper money, and although it’s one of the smallest Anglican churches in on the planet and islands. Its has a modest structure and steeple which may not be ornate or grand, but it does have some hidden treasures inside, and an unusual monument that you just have to see in the yard made out of giant whale bones.

#5 Shopping for Unique Arts and Crafts

Whilst there a no large shopping sites or malls, there are plenty of fantastic local stores, these sell locally manufactured clothes that are of a high quality and authentic, each with its own style and brand. You are also able to buy local jewellery for those who are a lovers of stones, that are made with the local semi-precious opaque pebble stone. The islands also cater for those that love arts, by having a home to a handful of local artists selling their paintings and also make paintings of people with local land and seascapes. While some items are expensive on the islands, but they are definitely worth the money and will provide you with life long memories

There is a reliable weekly service to Mount Pleasant provided by LAN Airlines from the city of Santiago via Punta Arenas in Chile. The flight leaves Santiago early in the morning, so you will need to stay overnight in Santiago. When you arrive at Mount Pleasant, there will be a 30 mile journey to the capital Port Stanley, this trip takes just under an hour.